After finalising on Kang Yatse 2, I had my travel arrangements in place and waited eagerly for Jul 12. I had stopped my cross fit training a couple of days before leaving to give my body the required rest before starting the expedition. Plus, I started experiencing lower back pain which would turn out to be a slipped disc case just after a month. Ignoring such rarest possibility emerging out of a lower back pain, I started visualising the summit day and my excitement to be on the top of the world. Having said that, I was also prepared for possibility of being barred from attempting the summit by the trek leader.

On 22nd of July at around 12:15 AM, I could sense some bustle going on around the tent. I was unable to sleep due to anxiety over the summit chase we were attempting this night. Last afternoon, we could spot some trekkers coming down the glacier after their summit who looked so minuscule on this mighty creation of nature. I woke up Suresh and Siddharth and we packed our bags with crampons, ice axe, water and food. It was pitch dark and cold. Also, it was a lucky day for us as the weather was calm, both at the base camp and on the peak. Geared with a layer of breathable thermals, quick dry t-shirts and down jackets, we started climbing towards the glacier. I must say it was pretty steep. We couldn’t climb more than 15 steps at a time. The oxygen getting diminished gradually could be felt. After 3 hours of climb, we reached a point at around 5700m where actual glacier trek would begin. After adorning ourselves with harnesses, gaiters, crampons, helmets and ice axe, the guide called upon us to come one by one so that he could tie us by the rope. And then, we continued towards the silent dark.

All 8 of us were in-line secured by a rope. It was a good slope: some 45 degrees. We had to dig our crampon-ed feet in the snow to stay still. One step at a time without wasting much energy. Anyone barely spoke, except the guide. We just treaded through the way, in the dark. Dawn broke over the mountain at around 05:30. With slight light to guide our way, we could see the whitewashed arena. So sacred it felt! Not a single speck of dust, not a single change in colour: Just White! And what’s down there on right hand side? Vast emptiness. It was such a huge glacier! With this kind of slope, anyone would be afraid to slide down. After some 20 minutes of sluggish walking, I asked my friend to look right. He got equally horrified as I because what we were looking at was a whole mass of black cloud approaching us from a distance. I have never seen such a huge black vapour ball so close in my entire lifetime. ‘It must be normal‘, I convinced myself, as the guide was not bothered about it coming towards us like a storm.

Moving ahead, the light got stronger and the views got more astounding. Even though the atmosphere was harsh, the ultimate landscapes paid for it. The clouds disappeared for some time. It gave us a scope to greet other mountains surrounding Kang Yatse which were relatively smaller. The sole fact that no other mountain in my farthest sight was higher than the one I was standing on right then made me feel contended and proud. The patterns formed by the snow-topped Himalayas were breathtakingly fantastic. It seemed like the mountains had draped white rugs to beautify themselves. Some beautiful things come at a good cost and I am glad I paid that cost. (Don’t think in terms of money!)

Time was an illusion there; so was space. When your mind and body both start playing games with you, you might not know how to react. That’s why rigorous physical and mental training is required. My body weight suddenly felt doubled to me. Each walking step was a mourning gut. Crampons can be blamed as equally as should be thanked. Without them, you are nowhere on a glacier. Wind gushed through us from all the directions. What we wore: The scientific layering of clothing, seemed useless suddenly. Never had I ever felt so dry from inside, constantly in a need of a sip of water which, given our task, was pretty much limited. Even to reach my water bottle strapped in my backpack, I couldn’t garner enough courage to remove the double-layered gloves. We were so exhausted that after every 4 steps, we would need a break. But no one is ever rich enough in terms of time when we do an expedition. There’s a turnaround time and there’s a protocol. Mountains should never be underestimated.

We were gaining height with every step. With every other climbing step, the air became thinner. To survive in this beautiful abode was a test of our ability and will. It’s also important in such conditions how supporting your partners are. Fortunately, I had great motivators in my gang. I remember when one of us at the end of the rope felt disgustingly frightened and was shouting at this height because one of our climbing guides, the only person behind him, took a short break to fix the rope, all of us energy-deprived guys motivated him till the guide returned. Anyone among us in his place would have got terrified. Loads of love for this group!

After some time, we encountered a steep slope to climb to save some time. It required strong use of ice axe. This half a kilogram tool could support more than five times my body weight if properly affixed by the pick. The quality of technical equipments and the expertise of guide matter a lot on the mountains. We encountered a minor crevasse on our way up the slope which we had to jump through by fixing our axe above the crevasse and bouncing our bodies with the push of our legs with full power to get to the other side. It was a daunting task at that altitude for us. Strength training came to help during this moment.

We kept climbing the mountain until we came to a small plain area. Well, it looked relatively plainer. Resting our backs on an elevated, tilted portion of a huge rock, we took out our food supplies. After 10 mins of breather, our guide called to continue. With huge spirits, we all got up on our metal feet. Our trembling legs just had some 200m left to climb for the summit. My breathing frequency had escalated to 5 times the normal. My limbs felt numb. My chest expanded and mouth wide open in search of oxygen. The two sides of the brain started debating with each other whether to continue or not. The side which suggested to continue won. But merely after 20m further, the other side reclaimed its victory. Yes, I stopped there. It seems like a difficult decision but believe me, at that altitude, in those conditions, it was so simple, so relieving! The others continued, apart from us two.

On our way to Thochungtse from Markha

The green and bountiful Markha 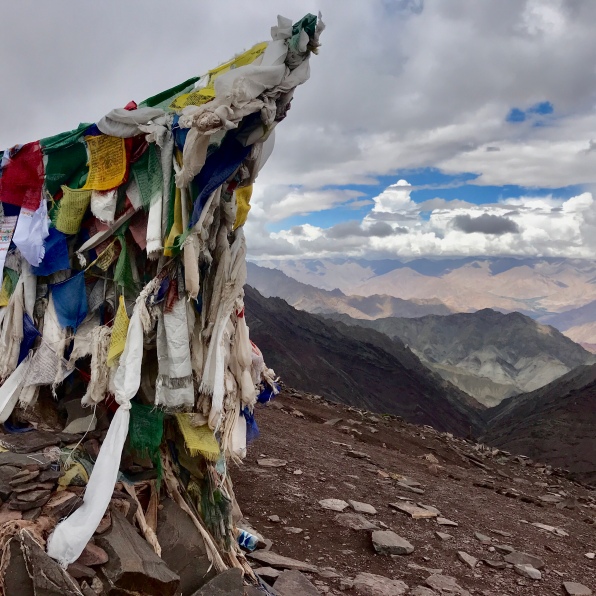 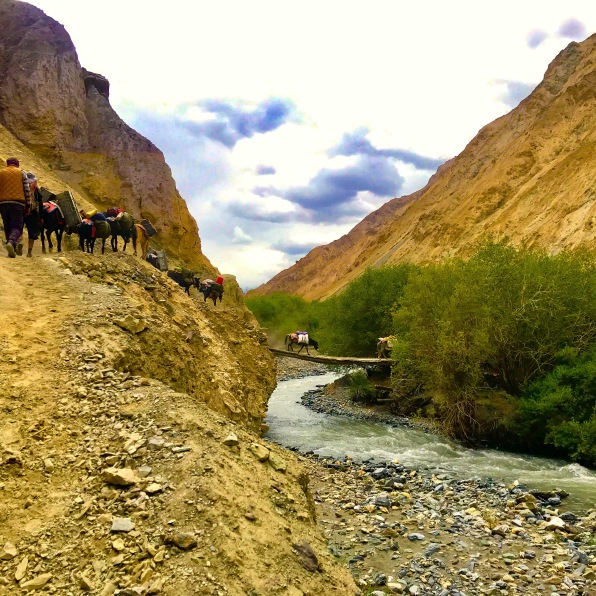 Bridge made by villagers to cross the river
The trek was a much required experience. It officially started on 16th July after two initial days reserved for acclimatisation at Leh during which we strolled down the main roads and small streets of the city and had local cuisines serve our guts. 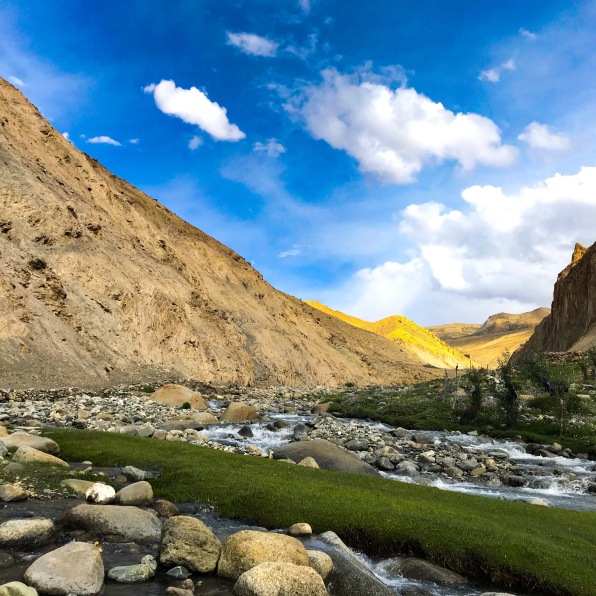 Shang Valley
Chilling (3200m): some 55 km from Leh, served as our starting point as it does for some real good treks including Chadar trek. From Chilling, we had a small trek of around 3-4 hours towards Skiu (3400m). The terrain was monotonously barren on the first day. Skiu was relatively greener and had a river by the camp side. To our excitement, we spotted a double rainbow carving its way between the mountains and forming a canopy over the river. Day 2 showed us a long trek from Skiu to Markha (3700m). Markha valley is so beautiful that in the arid deserts of Ladakh, you cannot imagine such a green place. Thochungtse (4200m) was our next destination which again proved to be an exhausting trek of 7 hours. The locals we met on the way and the journey itself was so beautiful that all our exhaustion melted away. On day 4, we camped at Nimaling (4720m) which was a pretty exposed plain green area resting between Kongmaru-la on the left and Kang Yatse base camp towards the right. The last camping site would be the base camp at 5150m. From here, we could see our goal: KY2. The hide and seek between the clouds and the mountains didn’t allow us to get a clearer picture of Kang Yatse twin peaks till the next day. It looked beautiful and dreadful at the same time. 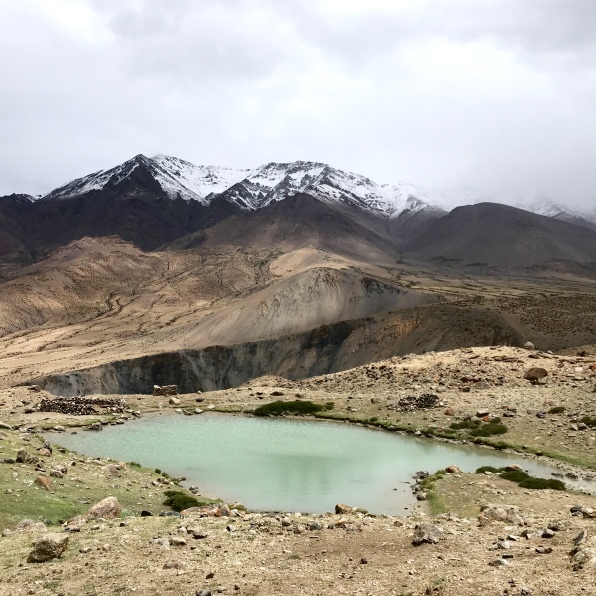 I would never say I would regret the decision to stop before the summit. The mountain will always be there and I can always come back provided I am alive, fit and fine. It is really important to know our limits and stop whenever required to. It is not about proving our mental fitness but it is about being wise in a calculated manner during such situations. You can map such situations to real life and see the results for yourselves.

This blog comes in relevance to one of my previous blogs on preparing for high altitude treks. Also, if you are planning to build up stamina and endurance, running is a great exercise. Visit my blog on running to know more.